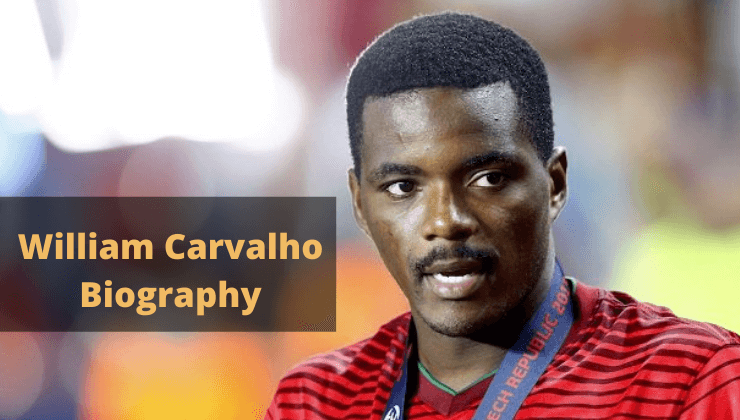 William Carvalho is a professional soccer player who represents the national team of Portugal, besides representing Sporting Clube de Portugal in the position of a defensive midfielder.

Since the first-ever team debut he made at the age of 18, he has spent most of his time with Sporting CP.

Most of Cavalho’s career has been spent at Sporting after he debuted with the senior team of the club when he was 18 of age.

He then went on to be part of 154 competitive matches and helped them lift the Portuguese Cup in 2015. He has been a full-time player with Portugal since the year 2013, being a part squad in World Cup 2014 and Euro 2016, and helping his team win the latter.

After Carvalho moved from South Africa to Portugal, his street displays were followed by getting selected by Recreios Desportivos de Algueirão for 2003-04, after which he joined União Sport Clube de Mira Sintra. He was not only the youngest member of the club but the captain of the team, as well.

He became part of the youth team of Sporting Clube de Portugal when he was 13, and debuted officially with the first team in April 2011 when he played injury time in a match against Vitória S.C. which ended in a 1–1 draw in Primeira Liga.

He was loaned out for six months to C.D. Fátima for third division soccer. When he was still signed with the Lisbon club, he was loaned to Cercle Brugge K.S.V. for one and a half years in the Belgian Pro League from January 2012.

He made his first pro goal in April during a match that ended in a 6–4 victory over OH Leuven. After a year, he led his team to the Belgian Cup final, in which they had a 0–2 loss to K.R.C. Genk. He then came back for 2013–14 under new manager Leonardo Jardim. His first goal for the club was in October, in a loss to FC Porto.

In the next season, he attracted the attention of many European clubs, and Arsenal got rejected even after offering £13 million, along with Joel Campbell. Sporting succeeded in getting Carvalho’s rights in totality only in November 2014, but the third-party ownership made a potential deal difficult.

Carvalho started the 2014–15 season with his first-ever red card during a 1–1 draw with Académica de Coimbra, as he received the orders to walk out of the ground after he got booked for the second time.

He succeeded in grabbing the first club title, helping his team lift the Portuguese Cup after he played against S.C. Braga in the final.

In the middle of all the speculations regarding his transfer to several Premier League clubs, including Arsenal, Jorge Jesus, the manager of the club, made claims about Carvalho’s permanence at the club.

In July 2015, It was confirmed by his club that his tibia had suffered a stress fracture, putting him on the sideline for three months.

In 2017, West Ham United’s offers led to a rift in the relationship between the two clubs, though it was eventually resolved.

Carvalho started his journey by joining the U17 team in 2007. He was eligible to join the national team of his homeland, Angola, as well as Portugal, but Carvalho decided that he would represent the latter.

The Angolan Football federation gave him a call when he was still a member of the Portugal U-20. Carvalho rejected.

He debuted with the Portuguese U-21 team in a match in October 2012, which ended in a 0–1 loss to Ukraine. During the qualifiers of UEFA European Championship 2015, he scored two goals, both of which led to wins against Norway and Israel.

In November 2013, Portugal coach Paulo Bento called him to join the World Cup 2014 playoffs opposite Sweden. His first cap was during the second leg, as a sub in a 3–2 win.

In May 2014, Carvalho was included in the 23-man squad for the final of the tournament. He debuted in the competition in June, during the second half of a group stage game that ended in a 2–2 draw with the US.

He was seen in all the games of the European Under-21 Championship 2015 and was selected as the player of the tournament owing to his displays, though he missed a penalty attempt against Sweden in the final.

At Euro 2016, he received a suspension and had to miss the semifinal win of Portugal over Wales, but he was present in the final which ended in a 1–0 victory at the Stade de France over the hosts.

In November 2016, he made his first goal in international football, which led to a 4–1 defeat of Latvia in the qualifiers of World Cup 2018.

Carvalho was born in Luanda, in the South African nation of Angola, to Simão Carvalho and Catarina Silva. When he shifted to Portugal, he was just a couple of years old.

He belongs to a family of soccer players, with his grandfather Praia, as well as uncle Afonso, being soccer players who represented Progresso Associação do Sambizanga, a club in Angola.

After moving to Portugal, he began showing his stints with the ball in the streets, before he joined Recreios Desportivos de Algueirão.

When he was a member of the U20 of Portugal in 2012, he received a call from Angolan Football Federation, who tried to persuade him to play for Angola, but Carvalho rejected it.

Carvalho has been considered as one of the valued members of the teams he has represented because of his fabulous displays which have not only led his teams to some memorable wins but has also earned him the following awards: