The great dancer and a social media star, Charli D’Amelio has earned the estimated net worth of around 12 million dollars as of 2022.

She started dancing when she was at the age of three. On the Top trending app Tiktok, she started uploading her dance videos in 2019. She rapidly became the app’s most popular creator. 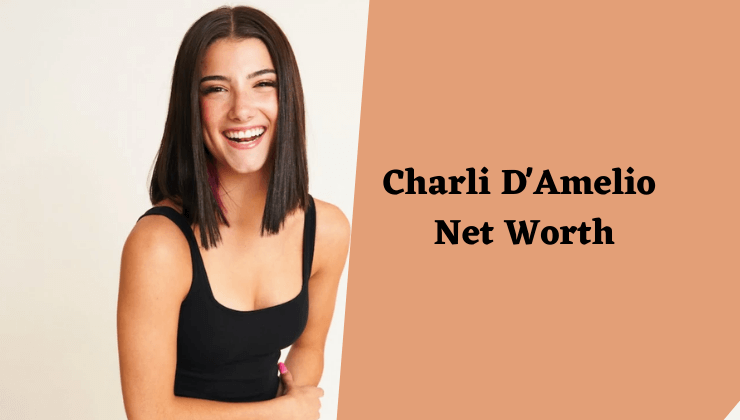 Charli is TikTok’s second-highest-earning celebrity. As of 2022, she has achieved a Guinness Book Of world for obtaining the most followers on TikTok. In 2022, she will appear in the docuseries The D’Amelio Show.

She went famous on TikTok in 2019 and currently, has over 132.9 million followers on the short video network, where she charges over $100,000 for each sponsored post she shares on the platform.

Charli D’Amelio Net Worth | What Was Her Income Before And After Social Presence?

Charli and her family were well-off before becoming famous on TikTok. She is the daughter of Marc D’Amelio, the founder of Level four Group, a multinational showroom and sales agency for a number of well-known fashion brands.

A bid for the Connecticut State Legislature in 2018 likewise fell through. Heidi D’Amelio, her mother, was previously a model and personal trainer.

Dixie D’Amelio, Charli’s elder sister, was ready to start college when she decided to become a content maker.

With a combined total of 192.2 million followers on TikTok, the whole D’Amelio family is now active.

In November 2019, Charli hosted her first meet-and-greet, a paid event in Connecticut with VIP tickets costing $100.

On occasion, she was able to raise $7,000 for charity. Later that month, Bebe Rexha, invited her to join her on the stage.

The D’Amelios made the decision to move to California about this time, selling their Norwalk property for $914,000 dollars.

Soon after, the whole D’Amelio family joined with UTA to collaborate on various projects, including podcasts, novels, television, sponsorships, and digital content.

As a result, Charli made her animated feature picture debut in 2019 as Tinker in StarDog and TurboCat.

After that, she worked on a variety of media projects, including a Super Bowl commercial for Sabra Hummus as the first TikTok content creator.

Her TikTok partnerships include a partnership with Hollister, which resulted in 2.5 billion views for the jeans brand in less than a week.

She also works with several firms on Instagram to develop sponsored advertising, which may pay anywhere from $27,000 to $45,000.

For example, her partnership with Dunkin’ Donuts arose from her unsponsored TikTok uploads, which provided the business with 294 million free video impressions.

Instagram users were encouraged to post photos of themselves enjoying the cold brew and to use the hashtag #CharliXDunkinContest, which resulted in the premiere of The Charli latte.

In addition to TikTok and Instagram, You Tube is another major social media platform that Charli uses to generate money.

Charli’s income was further expanded when she collaborated with the jewellery business Pura Vida to produce her collection of accessories.

The “Charli D’Amelio Pack” is a one-of-a-kind collection of bracelets that cost $45 and have her famous phrase “all smiles here” printed on the metal.

The D’Amelio sisters collaborated with Orosa Beauty on a limited-edition ‘Coastal Craze’ nail polish collection, which starts at $16 and goes up to $48.

To commemorate her 16th birthday, Charli chose to launch her line of branded products. It includes a $60 limited-edition sweatshirt depicting her wearing glasses and a party hat on it.

Her book, ‘Essentially Charli: The Ultimate Guide to Keeping It Real,’ will be published in December 2020, she stated.

The book, which cost $16.99 and described her experiences growing up as a TikTok celebrity, was published by Abrams Books.

A banking app she invested in the same month, Step Mobile, this is her first start up investment as a creator. Step Mobile has now gone public.

By the year 2022, Charli D’Amelio will have a fortune of $12 million. She is everywhere, with over 132 million TikTok followers, 9.64 million Youtube subscribers, and 46.3 million Instagram followers.

Sponsored postings, eCommerce, and production partnerships have benefited from her omnipresence.

She now demands more than $100,000 for a single sponsored article. A Super Bowl commercial for Sabra Hummus in 2020 earned her $1 million as well.

FAQs Regarding Charli D’Amelio Net Worth

Q. How much does Charli get paid on TikTok?

Q. Who is the richest D’Amelio?

The top TikTok performers’ incomes have risen dramatically in the last year, partly owing to their efforts to expand their renown outside the platform that initially made them famous. Charli and Dixie D’Amelio, the sisters at the top of our list of the highest-earning TikTok-ers, are proof of this.

Q. What is the D’Amelio family worth?

According to Distractify, Dixie is now worth roughly $3 million, while her sister Charli is worth around $12 million. Meanwhile, their father, Marc D’Amelio, has amassed his own money due to the family’s sudden celebrity.

Q. What is Charli D’Amelio’s net worth in September 2020?

Charli D’Amelio is a choreographer and social media star well-known for her TikTok videos. Charli D’Amelio’s net worth is $12 million.

Q. Is Charli D’Amelio A Millionaire?

Charli D’Amelio is a TikTok celebrity and a dancer recognised for her social media videos. Charli D’Amelio has a $12 million net worth. She became TikTok’s most-followed creator after releasing her dancing videos on the site for the first time in 2019.

Q. Why does Charli D’Amelio get paid?

Charli’s dominance on TikTok isn’t limited to that platform. She also makes money from YouTube ads, where she has 9.64 million subscribers and counting.