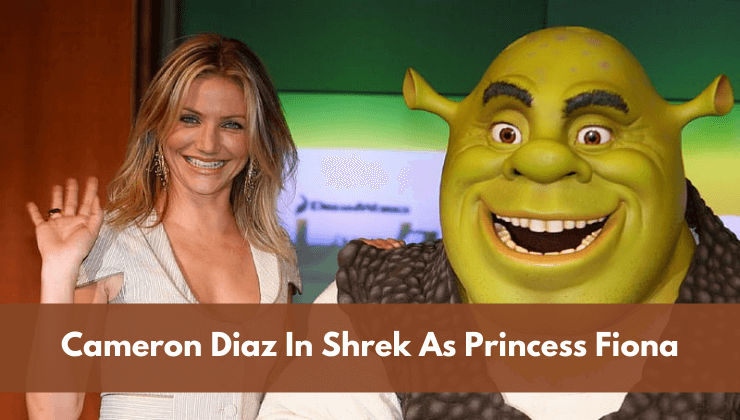 Cameron Diaz in Shrek (2001) performed the voice of Princess Fiona, who is one of the three main characters of the film. Over ten years, Diaz voiced Fiona’s character in all four parts of the Shrek series.

Originally, the actress and comedian Janeane Garofalo were cast for the character of Fiona. However, she was later fired, and she insists that it happened without any explanation.
Some sources revealed that the reason behind casting Diaz as Fiona was her sweet voice.

Cameron Diaz in Shrek, Shrek 2, Shrek the Third, and Shrek Forever After

Shrek is the first animated movie of Cameron Diaz’s career, and Princess Fiona is her first animated character. Diaz was excited about working with actors like Mike Myers and Eddie Murphy.

Diaz’s costars in Shrek were impressed with her commitment to the role. Cameron was so committed to her role that she regretted voicing Fiona’s character in an American accent after finding out Fiona’s origin. Princess Fiona’s parents were played by British actors Julie Andrews and John Cleese.

In Shrek the Third, Diaz had to work alongside her previous boyfriend, known as Justin Timberlake. They had broken up a year before.

Cameron Diaz was described as ‘the rock’ of the Shrek series because she brings such joy to the movies. Diaz admitted that Shrek movies were like her safety net because as soon as they would end filming one part, a year or two later, the production of the next part would begin.

Cameron’s wealth is largely credited to the Shrek series. Playing Princess Fiona made her incredibly famous among adults and children equally, and this character also made her rich.

Initially, Cameron received a cheque of $3 million for the first movie of Shrek. Later she negotiated her salary for the Shrek sequel. For the sequel, Diaz received between $10 to $15 million as her salary.

Shrek the Third was one of the highest-paying movies of Cameron Diaz. She was paid a massive amount of $30 million for the third part of the Shrek franchise. For the fourth part, Shrek Forever After, Diaz received $10 million.

Is Cameron Diaz in Shrek 5?

There’s still no news if we will be seeing Cameron Diaz in the movie, “Shrek 5” because of her retirement from the film industry. However, if asked, she might consider coming back for the character of Princess Fiona.

The Shrek series has been a huge success and has done amazing business worldwide.

FAQs Regarding The Character Of Cameron Diaz In Shrek

Q. What did Cameron Diaz do in Shrek?

Cameron Diaz played the voice of Princess Fiona in the Shrek movie. The Hollywood actress was cast for Princess Fiona’s character in Shrek, Shrek 2, Shrek the Third, and Shrek Forever After.

Q. How much did Cameron Diaz earn from Shrek?

Cameron Diaz Shrek 1 salary was $3 million. The first part of Shrek was released in 2001, and Cameron performed the voice of Fiona in it.

Diaz retired from the film industry in 2014, but she remains an ambitious woman. She penned down two books that turned out to be successful. Moreover, she is also a co-founder of an all-natural wine company called Avaline.

Q. Will Cameron Diaz be in Shrek 5?

Cameron Diaz declared her retirement from the film industry in 2014 and stuck to it. So far, she hasn’t made a comeback, so we can’t confirm her performance as Princess Fiona.
In an interview, Diaz admitted that if asked, she would think about coming back for Shrek 5 one last time.

Shrek 5’s release date is still not final, and there’s a chance that if the character of Princess Fiona returns, it could be played by a different actress.