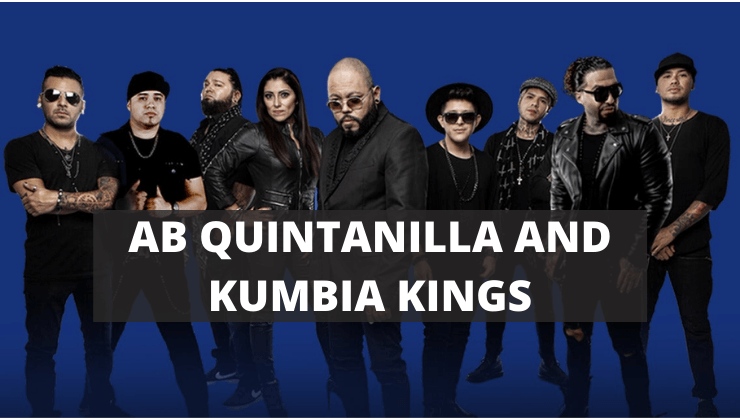 Moving on after Selena’s death was hard for every family member. But, AB Quintanilla has found its way through Kumbia Kings.

This band mainly focuses on Cumbia, music that originated from Colombia and renewed in Mexico. Moreover, Kumbia Kings also made their name in Rythym and Blue and hip-hop. Many times, the band also got nominated for many prestigious awards.

If you have listened to their popular songs and albums, you might have found their band interesting. But what’s more?

I bet you would be thrilled to know the history of AB Quintanilla and Kumbia Kings. Without wasting a second, let us find out more.

Why Are AB Quintanilla And Kumbia Kings Associated?

AB Quintanilla got the leadership of Kumbia Kings right after creating the band group. The group that he created found its producer in Cruz Martinez and Quintanilla. Both of them invented a lot in the band and helped it grow even more.

While AB Quintanilla is mostly known to the world as the brother of Queen of Tejano Music, Cruz Martinez also got fame due to his wife, Alicia Villarreal. Moreover, they both co-wrote many songs for the band.

Kumbia Kings | A Band By AB Quintanilla And Cruz Martinez

Kumbia Kings is the band co-founded by AB Quintanilla and Cruz Martinez to bring Cumbia and hip hop mix to the world.

This band, which later got dissolved, has released many albums. Its debut album, Amor, Familia y Respeto, has got its nomination in the Grammy Awards.

Moreover, the band also had luck in getting an American Music Awards in the year 2003. This band was bilingual and has produced both English and Spanish songs.

Did AB Quintanilla And Cruz Martínez Had A Fight?

The Kumbia Kings continue to spark amid controversies and fights among the band members.

One major quarrel was between AB Quintanilla and Cruz Martinez, which made the former quit the band.

What happened was, six years after the band got created, in 2005, AB Quintanilla and Cruz Martinez had a run in relating to monetary imbalances found through the finance records. Later in 2006, AB Quintanilla stopped performing in live concerts and tours.

After not being in contact with the band for four years, AB Quintanilla and Kumbia Kings got in touch again in 2009.

This time, they both did not collaborate as co-founders. Rather, their new bands, Kumbia All Starz and Super Reyes, came together and toured Mexico.

This reunion tour, which took place at Palacio de Los Deportes arena in Mexico, comprised 18 members from both bands. After the successful reunion in 2009, another one happened in late 2010.

Later, many rumors were that AB Quintanilla and Cruz Martinez would be on good terms and start working on a new project. But, the plan never got succeeded. Till now, AB Quintanilla is not a part of Kumbia Kings.

Albums And Songs By AB Quintanilla And Kumbia Kings

Kumbia Kings, a top-notch band, has released many albums and songs in the peak years of its success.

Its debut album, Amor, Familia y Respeto, was a great hit, with over 5 lakh album sales in just a few months.

Later, AB Quintanilla And Kumbia Kings released the album, Shhh! which got its place in the Latin releases at number 2. Not Just a Few Days, this song remained in the top position for two years.

Their other albums include, All Mixed Up: Los Remixes, 4, Los Remixes 2.0, Fuego, and Kumbia Kings Live. For the last album, the band earned a Latin Grammy award.

What Other Bands Did AB Quintanilla Create?

After leaving the band in 2006, he became a part of Kumbia All Starz, with Chris Perez as its prominent member. The band did great at the music records, releasing plenty of albums in its tenure.

After AB Quintanilla signed up with DEL Records, he changed the band’s name to Elektro Kumbia. This band is the latest for AB Quintanilla, and he has been a part of it since 2016. The band got boom by releasing one album and three singles.

Q. When did Kumbia Kings start?

Kumbia Kings came into being in the year 1998, three years after Selena’s death. AB Quintanilla formed the band alongside Cruz Martinez.

Q. Are AB Quintanilla and Cruz Martinez on good terms?

We don’t know for sure if they are still collaborating or not. But in 2009, Kumbia Kings had a reunion, and after that, they again had toured together in 2010. After that, no news of their friendship has circulated.

Q. For how many years AB Quintanilla was a part of Kumbia Kings?

AB Quintanilla was part of the Kumbia group for eight years. After that, he got separated from the band due to conflicts with Cruz Martinez.

Q. Will there be more Kumbia Kings reunions?

No, there won’t be any more Kumbia Kings reunion with AB Quintanilla. As both, the group and Quintanilla had moved on with their lives and has formed new bands.

Q. Did AB Quintanilla and Kumbia Kings are still together?

No, AB Quintanilla is no more a part of Kumbia Kings. Right now, he is a part of Elektro Kumbia, which is partnered with DEL records.