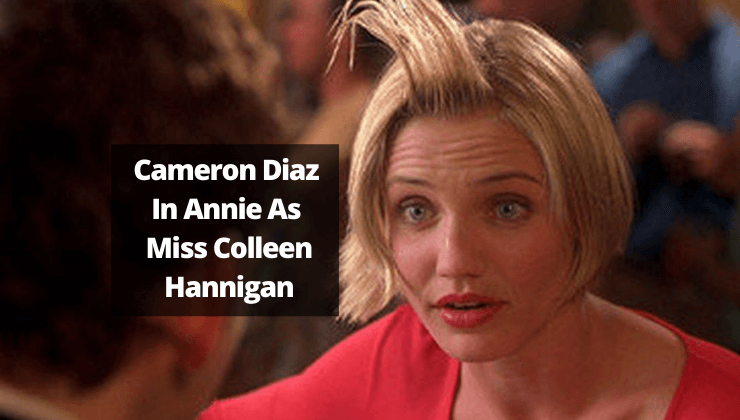 Before she retired from the film industry, Cameron Diaz played the character of Miss Colleen Hannigan in the remake of the 1982 film Annie.

2014’s remake of Annie was a challenging task for Cameron. She says she knew it would be hard to remake a classic like Annie, but she had to do it.

Usually, the biggest challenge is bringing something of your own to the character when you are performing in a remake. And that’s what challenged Diaz the most.

“To bring something new to the character that allows it to be current and vibrant, but also not step on what people love about this character,” she said. “That’s always a very difficult line to walk — and I love that, by the way.”

Furthermore, Diaz’s role as Miss Colleen has a cruel side as she makes her orphan, foster kids do all the house chores. But, it doesn’t stop there because Miss Hannigan also forces her foster kids to listen to her sing and admire it.

When Annie Bennet moves in with a mayorship candidate, Miss Hannigan gets greedy and wants a piece of the action.

Diaz thinks that her character of Miss Colleen Hannigan wasn’t a villain at first. She also thinks her Miss Hannigan is quite different from her predecessor Miss Hannigan, which Carol Burnett played. “It’s a different role for a different generation,” Diaz revealed. Like her role as Princess Fiona in Shrek, she did quite well in Annie.

Cameron Diaz in Annie’s movie Miss Hannigan wasn’t much different from her character in Bad Teacher (2011). Both these characters weren’t very kind to the kids in the movie and yelled at them every chance they got.

It’s not a secret that Cameron Diaz isn’t a trained singer, and when it came to singing in the movie Annie, Diaz had to get some training. Annie (2014) is a musical, and Cameron Diaz’s character Miss Colleen Hannigan is a former singer.

In an interview, Diaz admitted that two things terrify her the most, and one of those things is singing in front of people. That is why she agreed to do this movie – to address her fear of singing.

She explained that she was nervous and cried uncontrollably, but everyone enjoyed her singing. It was kind of funny, but that’s how you get through tough and scary things by having a sense of humor about them, she said.

Carol Burnett, who performed as Miss Agatha Hannigan in the original Annie (1982), had great things to say about Cameron Diaz in Annie (2014). She said she had been a fan of Diaz since her movie My Best Friend’s Wedding (1997).

Who sang for Cameron Diaz in Annie?

No one sang for Cameron Diaz in Annie; the movie was a remake of the Broadway musical, so the cast members did all the singing.

Did Cameron Diaz sing in Annie?

The movie is a musical, and she lip-syncs all of her songs. So basically, yes, Camron Diaz sings in Annie 2014.

Who does Cameron Diaz play in Annie?

Cameron Diaz plays the role of Miss Colleen Hannigan in the remake of Annie in 2014. The character is a mean-spirited, alcoholic woman who is employed as the caretaker of the orphanage where Annie lives. Miss Hannigan is known for her strict rules and abusive treatment of the orphans in her care.

How old was Cameron Diaz in Annie?

Cameron Diaz was born in 1972 in San Diego, California, United States of America. She was at the age of 40 when she played the role of Miss Hannigan in the 2014 movie Annie.

Cameron Diaz sings in the 2014 film remake of Annie. She provides vocals for the track “Opportunity,” written by Sia Furler. An important thing to note is that she sings in the movie but does not sing on the released soundtrack.