Zendaya and Bella Thorne are two of Hollywood’s most well-known actresses, and they owe their success to Disney Channel.

The two became famous in the early 2010s for their characters on the television sitcom Shake It Up as CeCe and Rocky. 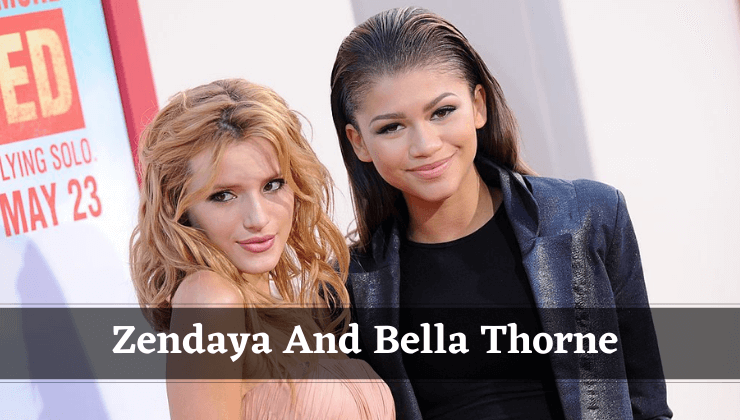 They not only created long-term careers as series stars, but they also formed a particular bond that lasted long after the show ended.

Fans have been fascinated with Bella Thorne and Zendaya’s friendship since they first revealed their dance talents on Disney Channel’s Shake it Up.

The actresses weren’t always BFFs, even though they are now closer than ever. From 2010 through 2013, the actresses appeared performing as “CeCe Jones” and “Rocky Blue” on Shake It Up.

While they’ve since gone their ways to act in a slew of different TV programs and films, their friendship has remained as close as ever.

Zendaya and Bella have both bragged about their lengthy connection in interviews and on social media throughout the years. Besides, Zendaya and Timothee are still said to be together as friends.

Now, J-14 is reminiscing about Bella and Zendaya’s friendship from the very starting point, recalling all of the times they reconnected and raved over each other during interviews.

The program, which starred Zendaya and Bella Thorne was created by Chris Thompson, follows Rocky Blue (Zendaya) and CeCe Jones (Bella Thorne) as the great background dancers on a local event called Shake It Up Chicago.

Other main characters in the series include Roshon Fegan, Davis Cleveland, Adam Irigoyen, Caroline Sunshine, and Kenton Duty. The initial plan for the program was for Disney to make a female buddy comedy with a dancing element.

Frenemies is a teen comedy-drama television film and anthology on Disney Channel in 2012. It is based on Alexa Young’s novel of the same name.

Three pairs of adolescent buddies journey from friends to foes and back again in the film. Daisy Mayer directed the film which was co-written by Wendy Weiner, Dava Savel, and Jim Krieg.

The Disney Channel Original Movie debuted in Canada and the United States on the 13th of January, 2012.

“Watch Me” is a song by Bella and Zendaya, two American vocalists. Ben Charles, Aaron Harmon, and Jim Wes produced it; They also co-wrote the music for the Disney Channel TV series named Shake It Up’s album, Shake It Up: Break It Down(2011).

On June 21, 2011, Walt Disney Records released it as a single. The music to Shake It Up: Break It Down also includes an original version of the song, which was sung by Margaret Durante.

Bella and Zendaya perform the second tune from the soundtrack. It reached 63 on Billboard’s Hot Digital Songs and 86 on Hot 100. The accompanying music video shows Thorne and Zendaya dancing with other individuals in a building.

Many of us have seen what Disney Channel has to offer perfect friendships look like throughout the years.

From Alex and Harper on Wizards of Waverly Place to Cory and Shawn on Boy Meets World, fans have modeled many of their relationships after these characters and continue to do so today.

On Disney’s Shake, It Up, CeCe Jones and Rocky Blue had an on-screen connection that was very unusual.

The show followed these two friends as they wanted to become professional dancers on the local television show “Shake It Up, Chicago!” While many people think their connection is flawless in every aspect, fans quickly labeled Thorne and Zendaya’s real-life friendship as picture-perfect.

Zendaya and Thorne, like their characters, developed a strong friendship that lasted throughout their tenure on the program.

While it would be simple to assume that these two hit it off right away, it turns out that their tight connection didn’t develop until much later.

Zendaya and Thorne were best friends for the rest of Shake It Up’s three seasons after they became best friends.

Even though they both moved on to more extensive and more incredible things in their careers after the series concluded in 2013, they maintained their strong bond.

FAQs Regarding Zendaya And Bella Thorne

Q. Do Zendaya and Bella Thorne like each other?

Regarding their present friendship, Bella told US Weekly that she is delighted to continue to support Zendaya.

Bella Thorne and Zendaya are, without a doubt, some of our favorite celebrity BFFs! On their successful Disney Channel show Shake It Up, they showed their great dance talents together.

Bella Thorne Claims She and Zendaya Were “Pitted Against” Each Other During working on “Shake It Up”.

Q. How old were Zendaya and Bella Thorne in shaking it up?

Q. What happened to Zendaya and Bella Thorne?

Bella told US Weekly that she is more than eager to continue to support Zendaya in their current friendship. Though the Disney Channel series has been concluded, it looks like Bella and Zendaya are still friends.

Q. How old are Zendaya and Bella Thorne?

Q. What does Zendaya say about Bella Thorne?

Zendaya confessed, “This is from a long time ago.” “Back in the Shake It Up days, this is Bella and me.” She went on to detail the film’s backstory and the dynamics of their relationship while on site. “I’m not sure where we were or what we were doing, but I’m guessing we were on set filming,” she explained.

Q. What disease does Bella Thorne have?

Bella has had dyslexia her whole childhood.

Tom Holland and Zendaya are trending these days as the best buddies.