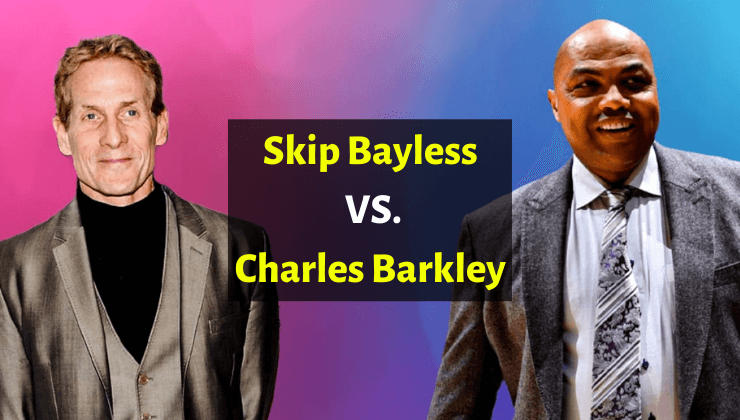 Finally, after a long silence, ESPN’s Skip Bayless has replied to Charles Barkley.

In recent years, Barkley a Most Valuable Player and Basketball Hall of Famer insulted Bayless in print and on Draymond Green’s “The Draymond Green Show.”

Barkley used cheap words for Bayless as “jackass” and mentioned that he hates Bayless more than anyone in his life due to Bayless’ criticism of Aaron Rodgers and LeBron James.

After years of scrutiny, Bayless is now clarifying his apparent rivalry with Barkley on his podcast, “The Skip Bayless Show.”

According to Bayless, he’s perplexed by why Barkley has such a low opinion of him.

Bayless also addressed Barkley’s contention that he is too harsh on Rodgers, noting that after convincing Shannon Sharpe to acknowledge Rodgers’ postseason shortcomings, he has been correct about him.

What Happened Between Skip Bayless And Charles Barkley?

Skip Bayless vs Charles Barkley’s hate isn’t new. He has been on TV for the last 15 years. And he went to TNT during the 2020 NBA playoffs.

Everyone knows I despise Skip Bayless because I believe he’s the ruler of, ‘I’m just going to say anything to get people riled up,’ Barkley said in an episode of The Pat McAfee Show.

What drives me nuts, in my opinion, is that he’ll miss nine out of every ten games and then boast about the single upset he achieved from those 10. I despise people who do it on television.

Skip Bayless Was Astounded By The Response Of Charles Barkley

This week, the rivalry between ESPN’s Bayless and Barkley received national attention, with the latter saying his wife is enjoying the recent reaction that has put her at the center of a 15-year-long fight.

Bayless said that his wife would defend him to death, with all of her heart, soul, and might, in response to the question about whether she would fight Barkley.

She’s about a third of Charles’ size, and she’s in excellent health. She is just one-third as powerful as he is.

“Charles Barkley is afraid to get to know me.” — @RealSkipBayless pic.twitter.com/91HXRPxgGA

Barkley has been relentless, to say the least, in his assaults on Bayless.

When they initially crossed paths, he threatened to kill him on a few occasions, an empty threat that very few sports followers or journalists would have taken seriously.

During last week’s Bayless Show, a behind-the-scenes examination of how Barkley’s casual threats have impacted his family throughout the years revealed that he had been threatened with harm on numerous occasions.

It’s one thing to threaten someone in the heat of the moment, it’s another to follow through on those threats.

However, his wife Ernestine is afraid that the threats might drive someone crazy enough to kill her husband.

The reaction of the media to Ernestine’s anxiety stunned Skip Bayless, according to this week’s Skip Bayless Show on Fox Sports.

Why Charles Barkley Wants to Kill Him?

The distinction between Skip Bayless and other sports commentators is that he is a controversial figure in the sports media world.

His primary currency is inflammatory rhetoric. He knows to push the right buttons to annoy half of his audience while simultaneously eliciting enraged resistance from the other.

The only Charles Barkley despises Bayless more than anyone else in the public eye.

Barkley has never been hesitant to voice his open dislike for Bayless’ hot take approach to driving discussion and engagement by participating in the hot take industry.

He discussed this on Draymond Green’s podcast when he remarked that Bayless’ continual criticisms of LeBron James and Aaron Rodgers were proof of his dislike for both players.

Skip Bayless was furious after learning about Brandi’s affiliation with Nick Cannon. He decided to spend an hour of his show digging into their background, which he did in this segment.

According to Bayless, here’s the rub: they have no prior experience. I’ve never spoken to Barkley, according to Bangs.

Although, for the past ten years, Barkley has attacked him constantly and even stated that he’d like to murder Bayless on television.

For an hour, Bayless discussed Barkley and the numerous threats he’s issued against Undisputed host Skip. I sat through the entire podcast because I care about you, my friend.